The Pleasure of Work

Working in the wine world, one frequently meets wonderful people with incredible passion for what they do and the land they work. But you rarely come across people with the dedication, warmth, and world view as Ludovic and Marie Gros of Domaine des Terres Vivantes. More than just a vineyard–although a very special one–Terres Vivantes is a self-contained ecosystem that is equal parts polyculture farm, boulangerie, flour mill, and stomping ground for Tufi, the Gros’ extremely fluffy dog. Terres Vivantes means “living earth” and everywhere you turn at this domain you can see, smell, andtaste the vibrancy of life around you.

Terres Vivantes, located in the village of Blacé just North of Villefranche-sur-Saone, began its life as a mixed use farm belonging to Ludovic’s grandmother. In 1995, when Ludovic returned from a career as a sommelier to take over the property, there was no biodiversity or grass and the vines were in a state of neglect. Ludovic and Marie decided then to not only bring the vineyard back to life but to work the soil organically and to keep their production at a level at which quality could be assured. As Ludovic puts it, “we decided to do less to do more.” Ludovic came under the influence of André Rampon, a little-known natural vigneron in Régnie, and by 2012 Terres Vivantes was certified organic by Ecocert. The Gros also began growing their own wheat to mill into the flour for Marie’s phenomenal breads which she sells a few days a week from the house. In step with their overall natural approach, they aren’t really sure what wheat varieties they have as they grow them in a wild mixture in the fields next to their vines.

Although they are growing numerous varieties at Terres Vivantes, at the heart of their production is the Beaujolais-Villages ‘La Lutine’ that comes from 15 year old gamay vines planted to the granitic and clay soils gently sloping down from the house. These old vines are naturally low-yielding, and Ludovic reduces their yield further by pruning down to two bunches per branch. Grasses are allowed to grow between the vines to provide nutrients and aerate the soils. All the work in the vineyards, including harvest is done entirely by hand. All of this is a tremendous undertaking for Ludovic and Marie but the result of their labor is amazingly delicious wine. While showing us his vines Ludovic says, “when you love what you do, and you do it in harmony with nature, it is a great pleasure to work every day.” 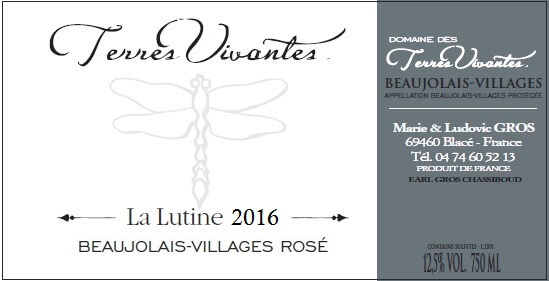 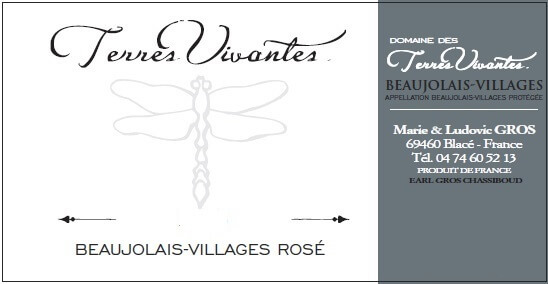