Fento Wines are made with organically farmed grapes from micro vineyards spotted throughout the Condado de Tea subzone of Rías Baixas. Prestigious winemaker Eulogio Pomares of Bodegas Zarate and his wife Rebeca Montero were both raised with vineyards for playgrounds and have spent their entire lives immersed in the industry of viticulture and winemaking. Their personal joint venture was created in August of 2012 and is a young, family business that makes wines that reflect the strength of the grapes and their nuances, but comes with a fresh focus and presentation, a personal enterprise that combines natural viticulture with new techniques.

Condado de Tea is named after a tributary ‘Rio Tea’ of Galicia’s most prominent and jaw dropping river, the Miño, which winds throughout the mountainous areas of the southern base of Galicia where the roads meander in and out of Portugal and Spain. Condado de Tea is the second largest sub-zone of Rias Baixas — it is also the furthest away from the coast, the warmest in temperatures (it can reach up to 100 degrees in the depths of summer) and the driest from rainfall. The soils here are rich with varying degrees of mica, granite and slate.

Fento wines relies on the assistance of their friends and family crew of small farmers, something which is vital if you want to achieve rational work that respects the environment. Many vines use spontaneous vegetation coverage to obtain more concentrated grapes, to improve the soil’s structure and avoid erosion. The vines are located in the South of Pontevedra, in the Condado de Tea sub zone. Grapes are planted in the “Xabre” soil, a popular name for weathered sandy granite soils. It uses the pergola vine training system. The white varieties are Albariño, Treixadura, Loureiro, Godello and Torrontés; and the reds represented by Susón, Espadeiro, Mencia, Cano Tinto, Pedral, and Espedeiro. Most recently, Eulogio has begun sourcing organic fruit from the Ribeira Sacra for his ‘O Estranxeiro’ wines. 10-15-year-old Albarino vines planted to southeast facing parcels in the ‘Xabre’ soils of Condado de Tea in the southern end of Rias Baixas. Organically farmed, and the pergola trellising helps in avoiding mildew. Hand harvested, de-stemmed. Natural yeast fermentation in stainless steel after a brief cold soak, followed by 6 months aging in the tank before filtration and bottling. 10-15-year-old vines planted in the southern end of Rias Baixas very close to Ribeiro. 67% Sousón, 13% Mencia, 1.5% Brancellao, 1.5% Caino, 8% Pedral, 9% Espedeiro. Organic, non-certified farming, hand-harvested. 15 day, natural yeast fermentation in stainless steel without punch downs or pump overs. The wine is then decanted to another tank for malolactic fermentation and 6 months aging before being filtered and bottled. 100% Albariño, planted in 1980 to granite ‘Xabra’ soils in the Castrelo district of the Val do Salnés sub-zone of Rias Baixas. The three hectare plot sits 25 meters above sea level alongside the Atlantic coast. Vines are trained on classic pergola trellising to avoid mildew. Hand-harvested in mid-September. Bunches are de-stemmed, and briefly soak on skins before natural yeast fermentation in Slovenian oak foudres. Aged on lees for 18 months prior to bottling.

79% Godello, 13% Albariño, 8% Treixadura planted to the granitic soils of the Rebeiras do Miño, and the slate soils of the Quiroga subzone on the boarder of Valdeorras. The vines average 20 years old and are trained on traditional Espaldera trellises. Hand-harvested, fully de-stemmed, native yeast fermentation in stainless steel. Aged on lees in stainless steel for six months. 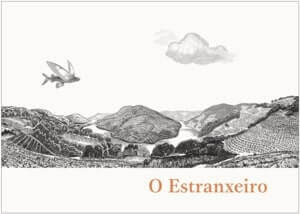 20-80 year old Mencía vines planted to granitic and slate soils in the Ribeiras do Miño, and 50 year old Mencia vines planted in Amandi along the Sil in a warmer sub-climate. Hand-harvested, fully de-stemmed, and soaked on the skins briefly before a 20 day fermentation in chestnut foudres with native yeasts. Aging in a combination of 2,500L concrete tanks, and French 1,000L and 4,000L foudres.